Gary Salathe, owner of Alternative Design Build Group, LLC,  and Leigh Anne Salathe transformed a mandatory retention pond at Bedico Creek into a nature-lover’s paradise. With a long history of cultivating different plant species both in and out of the different swamps and wetlands around Louisiana, Salathe took his extensive 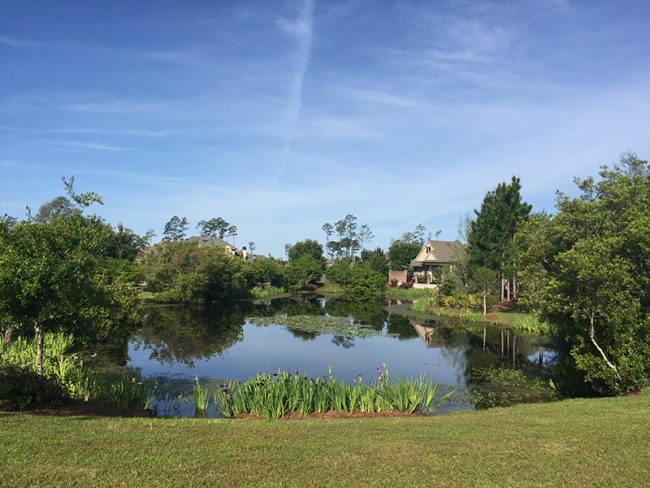 knowledge of plant life and seasonal growth and created a private wetland oasis next to his house in Bedico Creek.

This amazing pond did not got unnoticed by a particular local group named the Greater New Orleans Iris Society which worked together with Salathe to make him and his pond a part of the 2018 American Iris Society Convention in New Orleans.  The annual national convention was held by a combination of two organizations – The American Iris Society and the Society for Louisiana Irises. Visitors came to town April 8th – 14th and many stayed in the city of New Orleans. The convention regularly features several tours of local gardens in the city in which it is held. This year’s list of garden tours included Gary and Leigh Anne’s “A Louisiana Pond” on the Northshore of Lake Pontchartrain in Madisonville, Longue Vue House and Gardens in New Orleans, Independence Botanical Gardens in Baton Rouge, and Sydney and Walda Besthoff

Sculpture Garden, which is located at the New Orleans Museum of Art.

The history of the Iris Society is equally as important as its events because irises have actually seen a decline in growth in their native locations throughout the United States. In Louisiana, especially, irises could mainly be found only in the wild in swamps or wetlands outside of city limits. However, with the help of professional and weekend gardeners, the return of the growth of irises within city limits in professional landscaping and public gardens has seen a rise in natural annual growth once again.

Gary and Leigh Anne Salathe’s “A Louisiana Pond” was honored to be a part of such esteemed company for the garden tours and enjoyed approximately 230 guests to its location on the day of the event. Not to be outdone, right before the event, 3 families of mallard ducks showed up at the pond to be a part of the big day as well!

Click Here to View the Facebook Page for A Louisiana Pond, as well as Pictures of the Event & the Ducks!